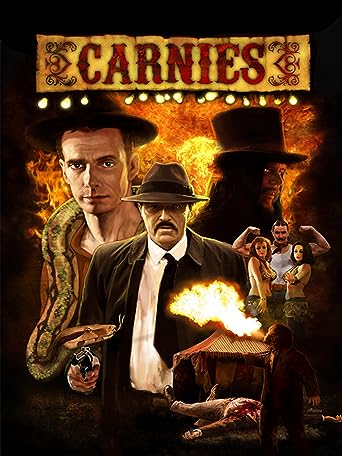 Sawdust in the Blood used to be a Carny compliment...not a description of a crime scene. There were a thousand sideshows playing thousands of small towns in 1936 when the Knuckles Brothers Show roll into yet another town, ready to delight and dazzle the town folk with amazing acts and puzzling oddities. As they set up their tents they could not know that within days several of them would be dead, ripped savagely apart by a seemingly inhuman ... (weiterlesen)force, their souls stolen from their limp and bloody bodies. Meet Helen, the owner of the Carny, drugged out half the time, demanding all the time--is she, in her drug-addled haze, the killer? Meet Virgil, the Strong Man with a weak heart for Zoe, the fortune telling gypsy enchantress. Meet Ratty, Virgil's friend and the Snake Handler for the show -- a peculiar young man understood by few. Meet William Crowley, the Sword Swallower, who, alongwith Virgil and Ratty, investigates the mystery, but perhaps too late to escape the same grisly fate as his colleagues. What sinister force is slashing its way through this family of performers leaving a trail of blood and crumpled, torn, soulless bodies in its wake? Step up, step up, ladies and gentlemen, the show is about to begin... 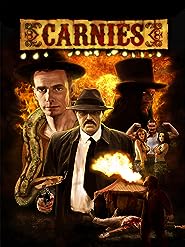